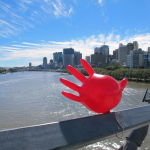 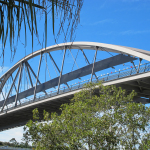 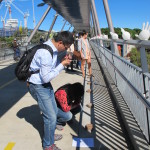 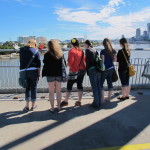 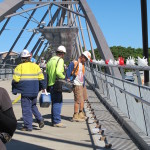 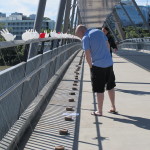 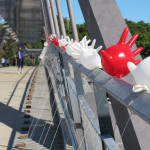 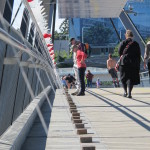 one in five was an ephemeral public art installation on the Goodwill Bridge (Brisbane). At the time of this project, published statistics on domestic violence were that one in five Australian women had experienced violence by a current or a previous partner at some point in their lives (1). To honour these silent victims, I installed multiple, inflated disposable gloves tied to a section of domestic building brick along the perimeter of the “Goodwill” Bridge. Each ‘hand’ embodied a woman who uses the bridge during the hours of 12-2pm, with every fifth ‘hand’ being red. Ironically, and according to philosopher Immanuel Kant, the idea of a ‘good will’ is frequently used to describe a man’s character, such as ‘a good man’. In 2001 the construction of the “Goodwill” bridge resulted in a budgetary blow-out and the use of $20.3 million in Queensland government funds to complete it. In the same year the government allocated only $13 million to preventing and responding to domestic violence (2). The intention of the work was to highlight the misdirection of government funds and the silent disgrace of domestic violence in this country.