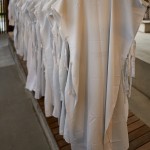 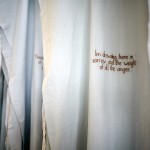 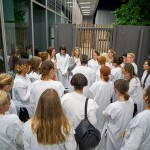 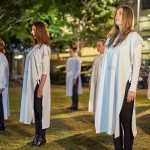 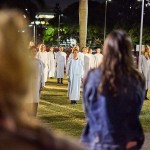 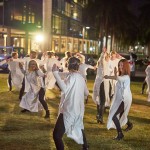 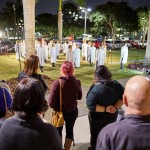 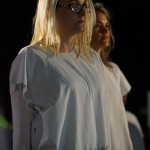 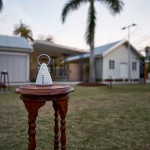 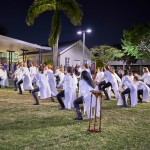 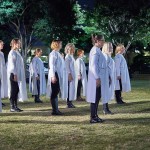 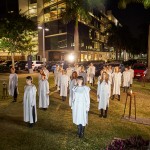 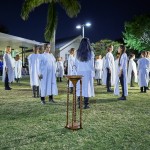 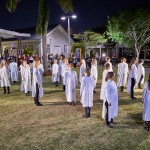 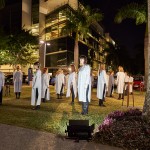 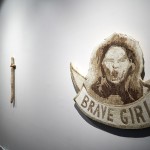 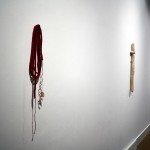 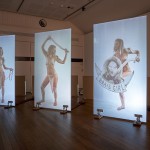 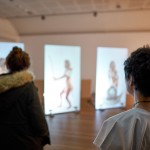 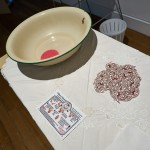 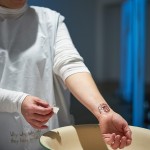 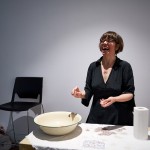 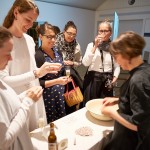 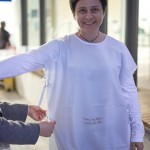 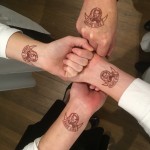 In a fearless bid to disrupt the insidious performance of bravery saturating contemporary culture, on command from their leader/drill sergeant (of the female karyotype 46xx variety), and some strategically positioned baby monitors, 28 women (dressed in identical maternity-type costumes each delicately embroidered with pieces of text) perform an earnestly awkward (but very brave!) performance of bravery.

The volunteer participants in Home of the Brave II perform a drill routine that uses the device of call and return to suggest a small army of women. The military metaphor is significant because in war, men are expected to do whatever it takes to protect their country. The stakes are so high they are expected to give their lives; to die for their country. Similarly, the risks associated with IVF drugs are not yet fully understood, but the expectation is the same — that women will do whatever it takes to get a baby. Women seem prepared to overlook the dangers of IVF because of their yearning to meet the expectations of femininity. The twenty-eight women performing this work wear smocks embroidered with text appropriated from online IVF pregnancy loss forums. The embroidered words are sewn in thread dyed with menstrual blood and positioned over the wombs of the performers.

The work explores how strategic discomfort can be used to shift beyond the affectively moving into deliberately disingenuous, evasive and insubordinate approaches to intimate subject matter. It asks us to consider what it means to be a ‘brave woman’ or a ‘brave girl’ today and how these labels are assigned. What do you have to do to qualify as ‘brave’, and even more importantly how are you expected to respond socially.