Employing signifiers of Capitalism, such as white paint and mass-produced building materials like plasterboard, ply, particleboard, MDF and timber stud[1], The KACA Projects constructed a solid, densely layered wall (the 5th wall) in a Brisbane-based experimental commercial gallery, Side Gallery. We then invited members of the public to participate in painting the wall “1000 times” for an arbitrary 43 minutes. 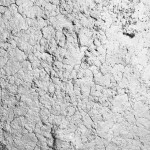 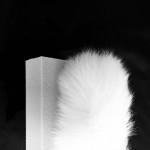 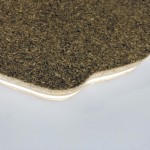 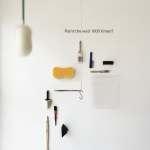 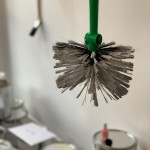 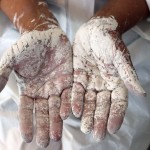 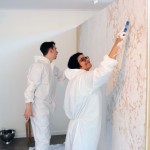 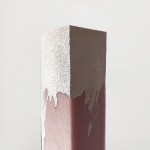 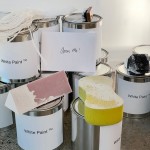 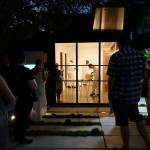 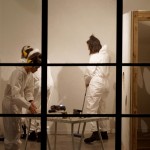 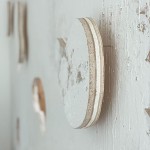 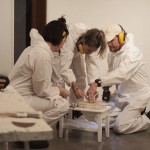 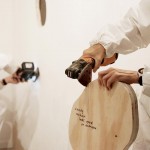 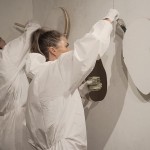 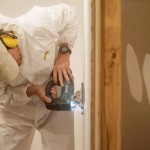 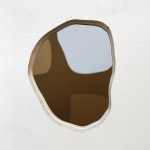 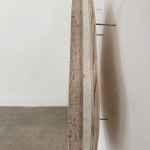 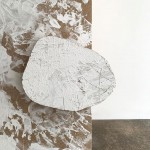 The project was experimental in that it intended to explore and potentially oppose the major characteristics and effects of Neoliberal Capitalism, such as the metaphorical acceleration of time[2], the overproduction of objects[3], the economic rationalisation of social life[4], the emphasis on the individual and the promotion of personal responsibility[5]. The project asked:

1. Can we re-evaluate the meaning and purpose of social relationships?
2. What happens when we collectively subvert productivity to thicken time?
3. Is it possible to cede power to participants in instructional art practice (for example, artistic authorial power)? And, what happens when we do?
4. Is it possible to produce a new kind of attention to the world and the people around us?

Although 43 Minutes was conceptualised and programmed long before the global COVID-19 crisis, the timing of 43 Minutes—unfolding as it did when the reality of COVID-19 was beginning to take hold—was critical to the way it has made meaning for The KACA Projects. The pandemic has brought the world’s focus and dependence on money into sharp focus. We have watched as people have panic-hoarded toilet paper, and others have profited. The driving focus of Capitalism—and its malevolent successor, Neoliberal Capitalism—is money and profit. Under this regime, social connections that exist outside economic gain are often undervalued, even irrelevant. COVID-19 served to powerfully illustrate this—laying bare the precarity of social connections. For us, our supporters and participants, 43 Minutes revealed itself to be a powerful demonstration of possible small modes of being that are so valuable and necessary in times of adversity. Connections for which we should all uncompromisingly fight, for their existence, relevance and value.

During the opening night performance, The KACA projects formed into a production line and brutally cut, and then reverently shaped and polished the wall fragments into objects to be sold for economic gain. The brutality of the cutting became symbolic of the way social connections are being eroded by Neoliberal Capitalism (made palpable at the time of COVID-19). For this performance, we divided our activities into distinct parts to mimic a production line—which of course also signals Marx’s concept of alienation under Capitalism—a disconnection from the whole.

The KACA Projects also present as a cohesive artistic collaboration, who come together at the end of the performance to lovingly stroke the outputs of their labour. Yes, we commodified the ‘painting experience’ (and ourselves) for ‘economic gain’—an act which acknowledges and questions the group’s complicity in Neoliberal Capitalism, and also (sadly), the impossibility (even futility) of our intentions. But our sense of community—our coming together to lovingly stroke the objects—plus the community created in the ‘painting experience’ (symbolised by the way the objects are hung in association to their counterpart – the void)—suggests a hope (and a longing) that these connections will endure after the project is finished.

[1] These materials were chosen because they signal what are generally considered to be instinctive human behaviours in contemporary life: the propensity to be productive; progress; increase status and wealth; to sell/buy/consume art and/or cultural experiences.

[2] i.e. people are all so busy, busy getting things done/moving forward—i.e. Neoliberal Capitalism sees people (apparently willingly and instinctively) pursuing individual progress narratives. The pandemic has really shown us how trapped we are by ‘busyness’. [there are obviously exceptions].

[3] Under this system, needless commodities are produced, marketed, continuously desired for economic gain and status.

[4] For example, our work lives largely determine our social relationships; nuclear families are economic units of production; people don’t (as a rule) connect with their neighbours or the environment, but rely on the instruments of Capitalism (consumerism) to survive, etc. [there are obviously exceptions].

[5] Neoliberal Capitalism encourages individuals to ‘willingly’ think entrepreneurially and feel solely responsible for their decisions and actions. What this means is that the state, and other institutional power structures, get away with not having to be responsible. This devalues collective action/activities.